Sashiko is a very cool Japanese embroidery technique. I’ve been wanting to try it for a while and I recently received the gift of a wonderful starter kit which made the perfect excuse to finally give it a try. 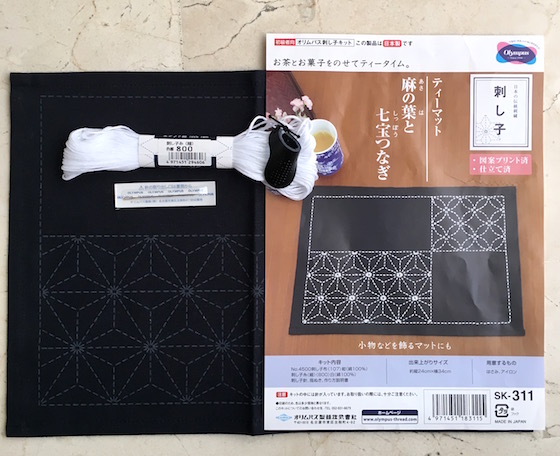 It seems this technique originated in Japan during the Edo period (1603–1868). It was used by peasants to mend and reinforce clothes but it also had an esthetic function, like everything in Japan.

And as with everything Japanese, sashiko is full of rules and traditions. It’s not difficult, but it requires time and patience; much patience.

This website has a lot of info if you want to delve into it.

Sashiko is made with running stitch. You are supposed to load several stitches onto the needle before pulling the thread.

The basic rules of sashiko are:

But that’s not all. As with kanji writing, each sashiko pattern has a correct order in which to be sewn. My sampler had two typical sashiko designs: Asanoha (the one that looks like 6 point stars), and Shippotsunagi (circles).

Here’s how to stitch Asanoha:

And how to stitch Shippotsunagi:

Another thing is knots. In many of the websites I read, they started by saying “Make a knot…”. But apparently, in traditional sashiko you are not supposed to make knots. The instructions that came with the kit suggest this method for starting and ending. 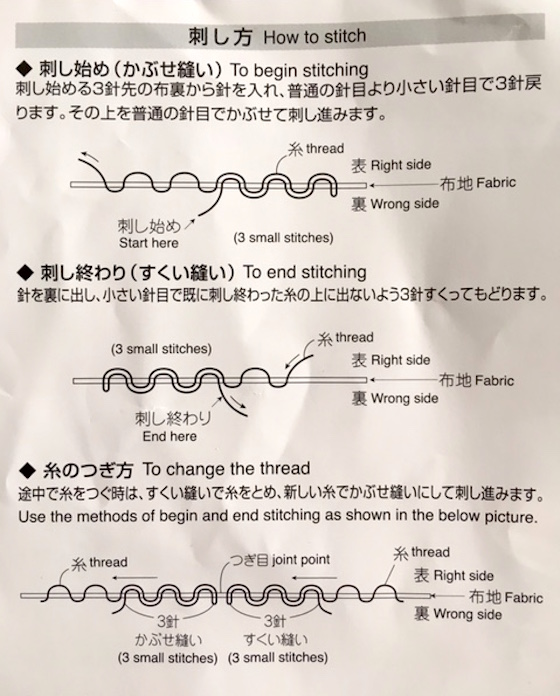 Once you’ve finished the sampler, wash it in cold water and iron. Instructions recommend low temperature and on top of a towel so it has like a cushion below.

I must recognized I failed at following some of the rules in the process… The back of the project looks dirty because there are too many fringes. I cut every time I had to change direction, and now I think I really shouldn’t have done that… But I followed the “no knots” rule. That, I’m proud of.

One thought on “Sashiko”