Baby Leire is on her way and this dream catcher is for her. 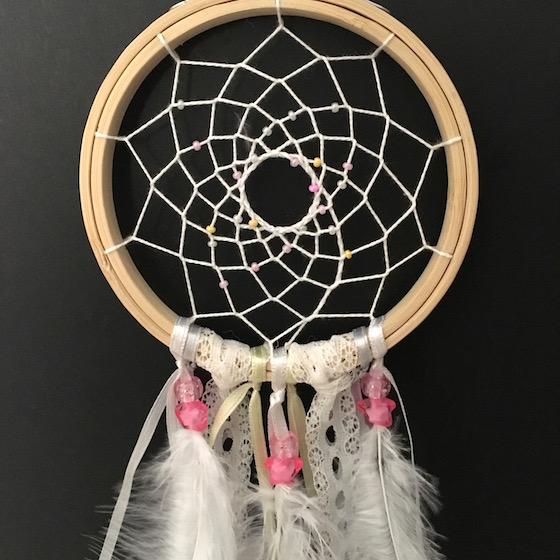 When you reach that age when everyone around you starts having babies, you can face it in two ways:

***Disclaimer: They are not mutually exclusive***

So… I’ve been wanting to make a dreamcatcher for a long time and the second child of my friend Laura has given me the perfect excuse to try it.

Internet is flooded with videos and tutorials and, as I usually do, I watched a lot of them and took whatever it felt right from each and applied it to my project.

The common things in all the versions I found are: some kind of hoop, thread and symmetry. Because it’s basically intertwining thread around a loop in a symmetric pattern.

This drawing I found in Pinterest explains quite well the process in a visual way. 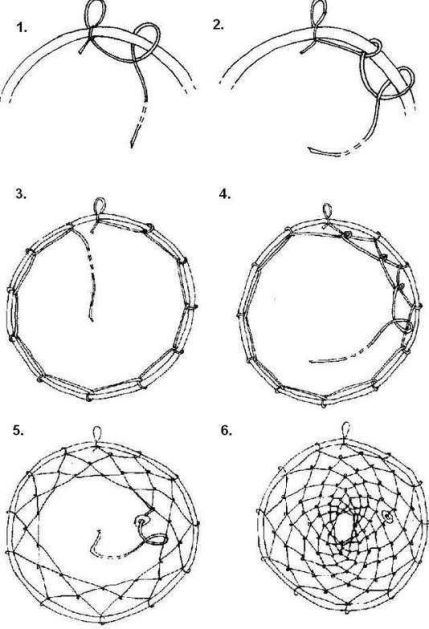 And here you have the basics in video. It’s a very simple video but it shows the process very clearly.

As you can see, every time you complete a row, the thread doubles in the first segment of the next row. If your thread is very thin, no problem, the human eye won’t even notice it. But if you are making it with thicker thread or yarn, here’s a tip to hide it a little by twisting it. Minute 6:00 of this video tutorial in  Spanish by SoY GeOrGiO

TIP: if you want to add beads, insert them all at the beginning and them move them up or down your thread to place them where you want. 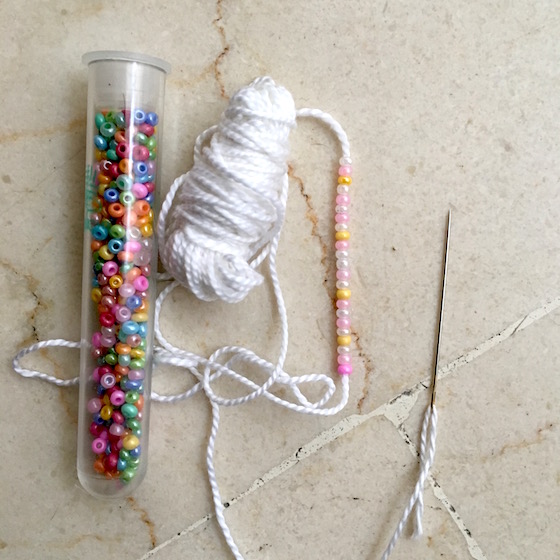 Warning: you don’t need so much thread. I was afraid of being short, but you definitely don’t need that much…

I measured the perimeter of my hoop and made 8 equidistant marks. 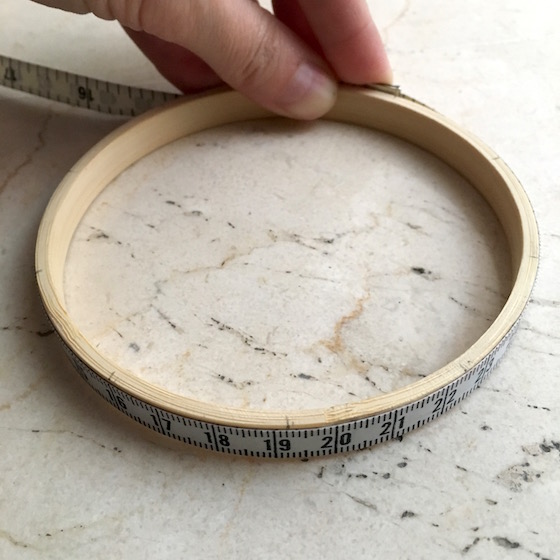 Starting with a knot in one of the marks, keep tying your thread around each of the following until you reach the beginning. I used a bit of washi tape to keep the thread in place. 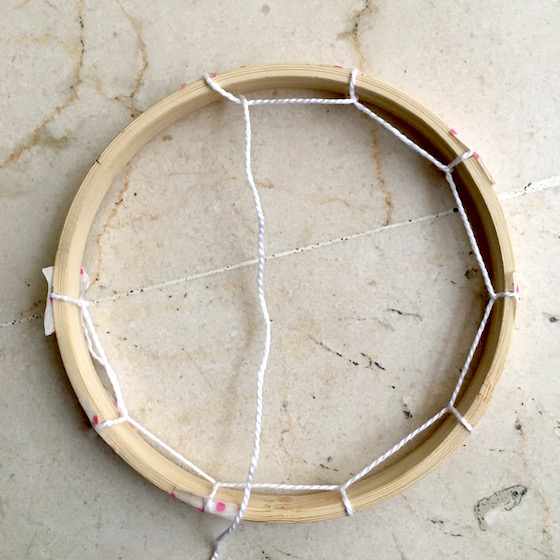 For the next rows, keep passing the thread around the middle of the sections from previous row. 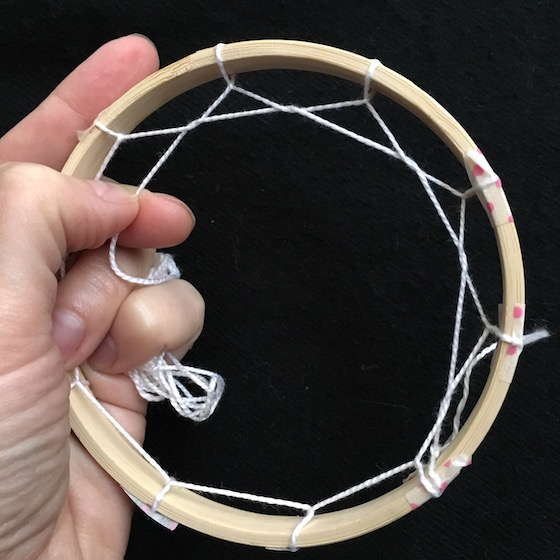 Move the beads in place when you feel like it. 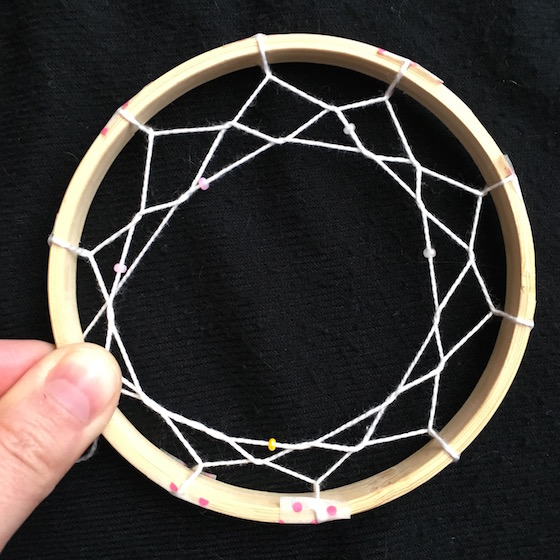 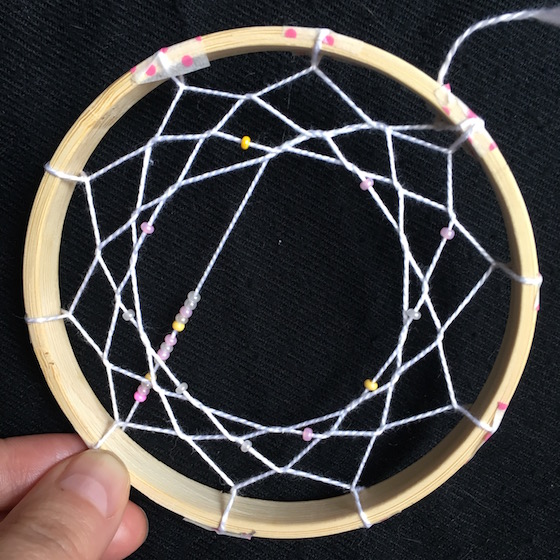 When you decide you’ve reached the end, secure the thread with a knot. 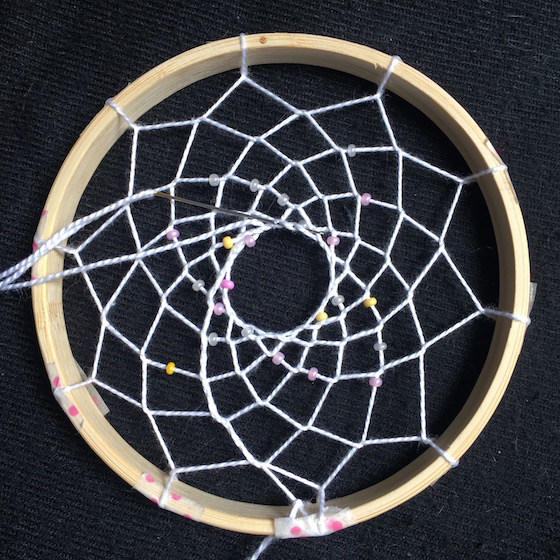 Et voilà! This was the first try and I must say I’m quite happy with the results. 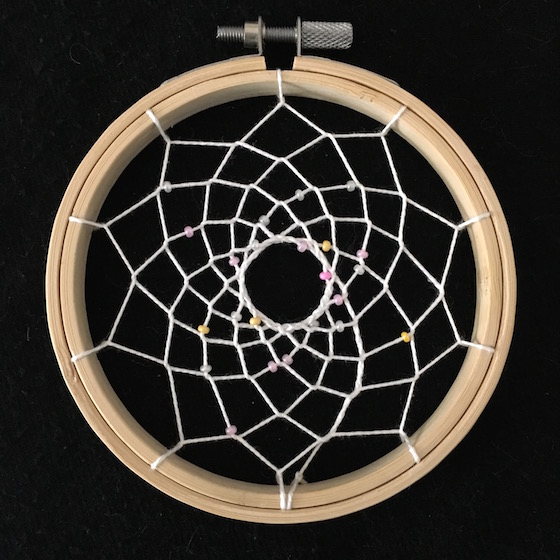 The only thing I’ll try to do better the next time is the joining of the first row, because it creates a double thread there I don’t like much…

IMPORTANT: Remember to leave a small gap in the centre. This Georgio guy from the video in Spanish I linked before didn’t leave it in his first dream catcher tutorial and it seems he got very harsh comments because, apparently, it doesn’t “work” without the gap… ¬_¬U According to some sources, the gap is for the nightmares to pass through, and according to some other theories the gap is for the good dreams to pass, and the net is for the bad dreams to get caught and stopped. Whatever it is, don’t forget the gap just in case… 🙂

Finally, decorate it freely with beads, feathers, ribbons, flowers or whatever you want. 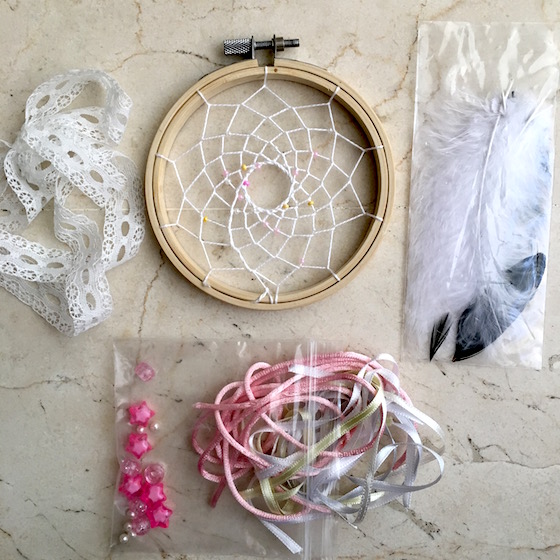 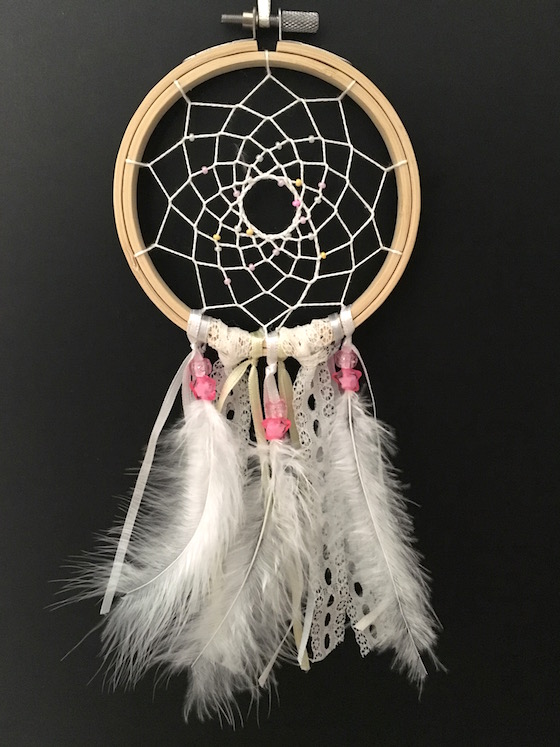